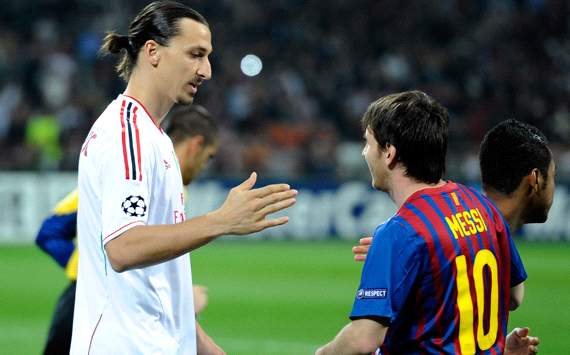 Paris St Germain’s power forward, Zlatan Ibrahimovic, is one controversial player who does not fail to bare his mind not minding whose Ox is gored. Last year, he was quoted as telling TV3 that “Leo Messi is all talent, while Cristiano Ronaldo is the product of much training. ”

This time around, the Swedish international has taken a double swipe at his former team mate at Barcelona, Lionel Messi and Real Madrid star, Cristiano Ronaldo in what might be deemed an unprovoked attack at two of the world’s greatest players at the moment.

“Messi may have four Golden Balls, but I don’t have to get on a box to buy a chocolate bar in a vending machine,” Ibrahimovic is cited as saying by Argentinean Canchallena website. “As for Cristiano Ronaldo, he’s a privileged spectator, who only watches how Messi receives all his awards. He doesn’t deserve to be in the top three, there are at least ten people better than him.”

Ibrahimovic, who didn’t make it into the top three this year also called Man City player Mario Balotelli a “mediocre” player and made some revealing statements about former Barcelona coach Pep Guardiola, in his autobiography.