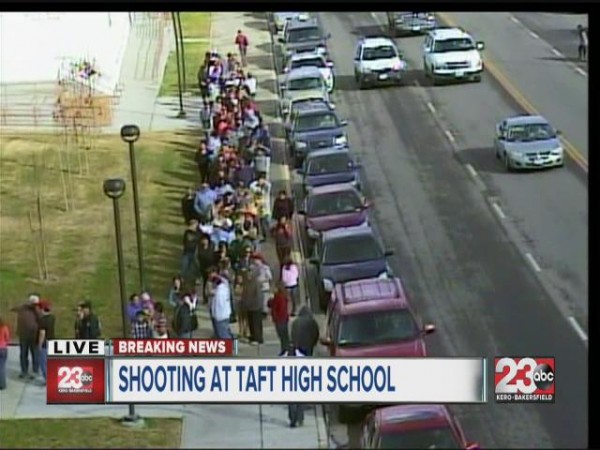 Less than a month after the Sandy Hook shooting that left 26 people, including 20 children, killed, a 16-year-old male student at Taft Union High School in California on Thursday, opened fire on his classmates injuring one.

The shooting which reportedly occurred in the science building at approximately 9 a.m. local time, took place when the suspected shooter, who did not show up for the start of first period, entered the school with a 12-gauge shotgun and interrupted his first-period class, shooting one student police say he was targeting

The victim, also 16, was airlifted to Kern Medical Center in Bakersfield, Calif., with a shotgun wound to the upper right chest. He’s in critical but stable condition.

However, the gunman who called out a second student’s name in the 28-person class before firing again but missed, was talked into surrendering the shotgun by a teacher and a campus supervisor inside the classroom. The shooter was then taken into police custody.

The teacher was treated at the scene for a pellet wound to the head while another student who was near the shotgun when it was fired, was taken to a local hospital, where she was treated for hearing loss. Friday classes have been cancelled.

Recent shootings especially in schools has led to calls for reforms to the country’s gun laws which have made the U.S notorious for gun related violence.