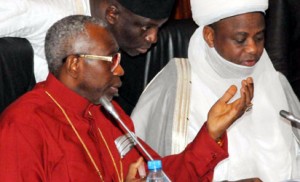 Sultan of Sokoto, Alhaji Sa’ad Abubakar III, has called on the Federal Government to commence the process of licensing preachers in the country to reduce the incidence of wrong indoctrination of youths.

In his goodwill message at the opening ceremony of a two-day peace and security summit organised by the Nigerian Bar Association, NBA, the Sultan said it was necessary for preachers to be licensed because, “it is in the process of preaching that people are indoctrinated.”

He pointed out that in view of the security challenges confronting the nation; it had become imperative for anyone intending to become a preacher to secure a licence from the government

National President of Christian Association of Nigeria, CAN, Pastor Ayo Oritsejafor however disagrees as he yesterday said that licensing preachers was not the right approach to curtail wrong indoctrination of youths in the country, as he argued that the moment government was involved in the censorship of religion, it stops being religion.

“What must happen, if you ask me, is that preachers generally belong to organizations and such organizations must sum up the courage to monitor the activity and content of the messages of every preacher with a view to disciplining them when they derail,” Oritsejafor said.

“Governments do not have the wherewithal to monitor activities of preachers across the length and breadth of the country. It is only the organizations that oversee the activities of their members that will be able to curtail their excesses.” He, added that there are some preachers who do not belong to any group, noting that in such cases the relevant organisations should be bold to come out to say so.