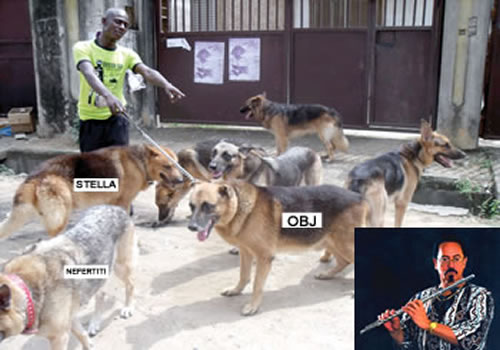 Former Performing Musicians Association of Nigeria (PMAN) President, Omatsola Iseli, popularly called Tee Mac, is a great lover of dogs. What most do not however know is, his dogs are named after famous world leaders and women. Yes, but one dog stands out from the pack for Tee Mac, and that dog is named after Nigeria’s former president, Chief Olusegun Obasanjo.

Tee Mac’s dog collection include Mobutu Sese Seko, the late president of Zaire, George Bush, Balewa,  Stella,  Nefertiti, Sambo, among others. But why is ‘OBJ’ an Alsatian breed dog, most admired by Tee Mac? The renowned fluitist narrated the feat OBJ had performed in its 11 years of dog age. According to him, the dog had fathered 72 puppies since he began mating and described him as a “super stud.”

“OBJ is a super stud,” he said, adding that the dog had been mating since he was three, which would have been 21 years of human life.

Explaining that the choice of names for his dogs was not borne out of disrespect to anyone, he said it was done to express how dearly he loved his dogs, disclosing that he used to have a dog he named after himself.

“I did not choose the names to insult anyone. My dogs are my best friends and they are all highly intelligent. I had two guard dogs in PMAN. One of them was called Charly Boy and the other , Tee Mac.

“When Dele Abiodun illegally took over the secretariat, they killed and roasted the two dogs and ate them to despise me”, he alleged, adding, “dogs are truly man’s best friends. They love you unconditionally, if you treat them well.”