The Imo State Chapter of the Peoples Democratic Party (PDP) has contributed about N18 million in a move to reposition the party to reclaim the state governorship seat in 2015. 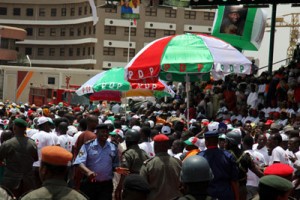 The Chairman of the Imo State PDP, Eze Duruiheoma, and the Chairman of Senate Committee on Aviation, Hope Uzodinma, disclosed this at a fundraising held at RockView Hotel, Owerri, Imo State, and attended by the Deputy Speaker of the House of Representatives, Emeka Ihedioha.

Mr Duruiheoma said the mandate of the party was taken from it illegally by the ruling All Progressives Grand Alliance (APGA) in the state. He said they were consolidating and re-strategizing to take back the seat of power, noting that to achieve that, funds and more branded vehicles were needed.

According to him, most projects embarked upon by the Rochas Okorocha-led government were not impacting on the lives of Imo people.

Mr Uzodinma, in his contribution, said the party was in a hurry to reclaim its power, lamenting that “the rule of law” was not being observed by the state government.