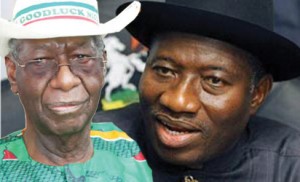 A Christian cleric, Apostle Eugene Ogu, has taken a swipe at the government on the recent appointment of Chief Tony Anenih as the chairman of the Board of the Nigerian Ports Authority (NPA), calling it an insult on Nigerians.

Ogu made his mind known while delivering a sermon marking the end of 2012. He opined that at his age, Chief Anenih ought to be one of the voices of wisdom the government would be listening to in the background and not a government appointee.

The founder of Abundant Life Evangel Mission (ALEM) said the government ought to be raising the younger generation to positions of responsibilities and not keep recycling those who had had their shots in the earlier history of the country. According to him, “I don’t see the reason for appointing Tony Anenih as chairman of the NPA board. Anenih should be a father and man who should seat and begin to give advice by now.

“His appointment is an insult to the mentality of the many young Nigerian intellectuals and youths who have the capacity of modern day ways of handling things. Anenih is an elderly man. He should be left to rest… They should show that he has the capacity of bringing up sons and daughters for positions of trust. For the likes of Anenih to be there is a sign of complete failure of the government; that they have no products, they have nobody they have brought up to become leaders.

“At this age, the president is still recycling the old people. It shows that he (Jonathan) has lost sensitivity to the present day challenges of Nigeria,” Ogu said.

Meanwhile, on President Jonathan’s recent remark that he would do better this year, the cleric said “there is no point for the president to say such. You don’t say it, you act it. Appointing Anenih as chairman of NPA does not show that he (Jonathan) will do better.” He then warned the government at all levels to be careful, pointing out that “if they provoke Nigerian masses to rise up in protest, they won’t contain the outcome.”