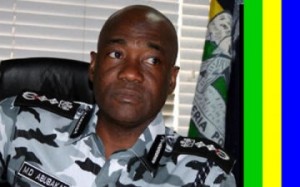 In a rather tragic development, a 35-year-old man, Mr Olusola Adegbegha, was on Tuesday, killed when he was hit by a bullet fired by a policeman attached to the Mokola Division in Oyo State.

According to Adegbegha’s brother, the deceased left Oluyole Estate area where he was temporarily staying with his younger sister around 5.00 a.m. only for the family to later find out that he was dead. The brother, Sunkanmi Owoeye, said the family was informed by the police that Adegbegha was stopped at Recreation Club area for a search, but proved difficult, which made a corporal to take him to the station.

Owoeye said the police claimed that on getting to the station, Adegbegha reversed and zoomed off after the corporal got down from his car to open the gate of the police station, which reportedly made the corporal shoot at the car. The bullet was said to have penetrated the rear trafficator of his Mazda 626 car and gone through the back seat into the driver’s seat, before hitting the deceased on the back and thigh.

Owoeye also said the security guard of Group Medical Hospital, situated beside the police station, also informed the family that the deceased came to knock on the hospital gate, telling him that he had been shot by the police. Though, Owoeye said the gate was eventually opened for his brother, he blamed the doctor for insisting on seeing a policeman from the Mokola police division before he could commence treatment, a situation he believed contributed to the eventual death of his brother.

Owoeye said he was told that the police still met his brother conscious and he was able to point to the policemen who shot at him before he died. He did not believe the claim by the Police that his brother was shot while he was escaping, saying that the bullet penetrated the car from the rear and anyone familiar with the police station would know that it was not easy to make a turn at its gate as it is very narrow. He said it was the belief of the family that there was more to the story than meets the eye and the family would want justice to prevail over the killing of his brother.

He revealed that the deceased had fixed his wedding for March, while his fiancee, who is based in Canada was being expected home before the end of January for their introduction ceremony. Meanwhile, reacting to the story, the state deputy Commissioner of Police, Mr Clement Adoda, said what really happened was that a stop-and-search patrol team stopped a green Mazda 626 with registration number PR 61 KJA driven by Adegbegha at about 5.00 a.m.

He added that the driver allegedly went wild when questioned about his identity and ownership of the car, which made the leader of the patrol team to detail a corporal to take him to the police station. Adoda stated further that on getting to the station, the corporal alighted to open the gate of the station and the driver seized the opportunity to take off. He said the corporal aimed at the vehicle’s tyre to stop the driver, but he still escaped, unknown to the police that the bullet had hit him.

He further disclosed that it was the security guard of Group Medical Hospital who came to the police station shortly after to inform the police that a man came to the hospital with a gunshot, where he later died while being treated. The Deputy Commissioner of Police, however, revealed that the corporal had been detained at the State Criminal Investigation Department (SCID), Iyaganku, while the case was being investigated.