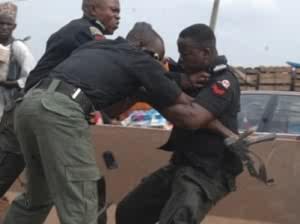 Apapa area of Lagos State was at the weekend thrown into pandemonium when some armed naval personnel and policemen from Area B Police Command clashed.

The incident, it was learnt occurred last Friday, after a team of policemen attached to the Lagos State Task Force on Environmental and Special Offences, accosted two naval ratings on a motorcycle riding against traffic at Trebo Roundabout and allegedly impounded their motorcycle.

Eyewitnesses said the angry naval personnel ran back to their base and reinforced but on arriving Trebo Roundabout, the task force officials had gone.

The aggrieved naval personnel allegedly descended on a team of policemen attached to the Rapid Respond Squad, RRS, manning an APC stationed at the Roundabout.

An eyewitness told newsmen: “The policemen, in their bid to escape, drove the APC dangerously and out of the roundabout  to the Area B Command Headquarters. Some of the naval personnel went after them. A police inspector attached to a leading new generation bank, on Liverpool Road, was  attacked and beaten to pulp while his rifle was taken from him.”

“The naval personnel on getting to Area B Command Headquarters, started shooting indiscriminately, sending motorists and residents scampering for safety.

“They smashed the windscreens of some patrol vehicles and one APC was completely demobilised as it tyres were destroyed.

“It took the intervention of the Area Commander,  Ali Mohammed, who contacted the naval authorities for help.”

Reacting to the incident, the Western Command information officer, Jerry Omodara, said that the Navy did not attack the police area command office.

“What happened was that two naval ratings were on their way home on a motorbike after the close of work and policemen manning a check point at Point Road junction towards Liverpool stopped them. The ratings tried to explain that they were personnel closing from work and the policemen refused to let them go.

The scene where the incident occurred was close to the Hydrographic office of the Navy and a Rear Admiral who saw it happened sent a lieutenant to the scene.

The lieutenant pleaded with the policemen, but they refused to listen. The lieutenant then demanded that they all go to the Area B police Command Headquarters.”

“But on their way to the Command, an RRS patrol van approached and hijacked the situation.  The RRS policemen opened fire on the Navy and snatched the motorbike from them,” Omodara said.