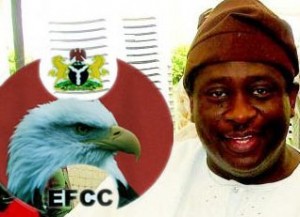 Dr Wale Babalakin, the Chairman, Bi-Courtney Highway Services, who was declared missing Wednesday, by the Economic and Financial Crimes Commission EFCC, was Thursday arraigned alongside Alex Okon and three others, over alleged money laundering, for former Governor of Delta State, James Ibori, in the sum of N4.7bn in 2006.

Babalakin, came into the premises of an Ikeja high court at about 10.06 am, in a black ML Mercedez Benz Jeep marked TP 425 AAA and dressed in a navy blue stripped suit with a white shirt and a red tie. He went straight into the court room, presided over by Justice Adeniyi Onigbanjo.

The legal practitioner, alongside Alex Okon, Stabilini Visioni Limited, Bi-Courtney Limited and Renix Nigeria Limited, are facing a 27-count proffered against them by the Economic and Financial Crimes Commission, EFCC, before Justice Adeniyi Onigbanjo? He, he was released by the court on bail based on self recognition.