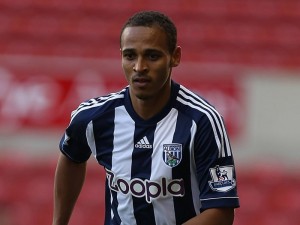 QPR who are battling relegation are keen to add Osaze to their forward line before the current transfer window closes on January 31, the London club put in a bid for the player but it was firmly rejected by WBA who insisted that  none of its core players are for sale.

Osaze who put in a transfer request at his club, citing not having enough playing time as his reason had his transfer request turned down, as WBA is keen to hold on to the player until the expiration of his contract in 2014.

“Peter is hugely popular with our supporters and it is disappointing that he has decided to hand in a transfer request. It was immediately turned down and has done nothing to change our stance during January.

“Peter is under contract until the summer of 2014 and we have no need or desire to sell our core players. We want to keep the squad intact to enable us to build on an encouraging first six months of the season,” Richard Garlick, WBA’s sporting and technical director said.

Odemwingie has responded with a long statement which read: “I’m deeply hurt and in some ways offended by the lack of reciprocal common respect from the management of West Bromwich Albion.

“During my time at the club I believe I have delivered performances, effort and goals.

“I never complained when I found out that the club failed to inform me of enquiries that might have interested me and my family in the past.

“Everyone knows how much effort and commitment I always give when I play for the club. The fans have been great with me and I will always respect them.

“Some may say I have contributed, along with all my team mates, to the survival of the club in the Premier League in recent seasons.

“At this stage of my career, this opportunity may not come around again. A new challenge, a new opportunity, and a chance to play under the stewardship of one of the most respected managers in the game (Harry Redknapp).

“I hope the management of West Bromwich Albion will accept my transfer request in the manner that I have requested it.

“West Bromwich Albion may argue that I am too vital a member of the team to allow me to leave now but I could argue that team selection so far this season has not reflected that and there is more than adequate cover for my position currently in the squad, culminating in my playing out of position.

“I have not taken this decision lightly and I would like West Bromwich Albion to accept what, in my opinion, is more than a reasonable offer from QPR for me.”

Odemwingie arrived at West Brom in 2010 and has scored 30 goals in 80 appearances for the Baggies.