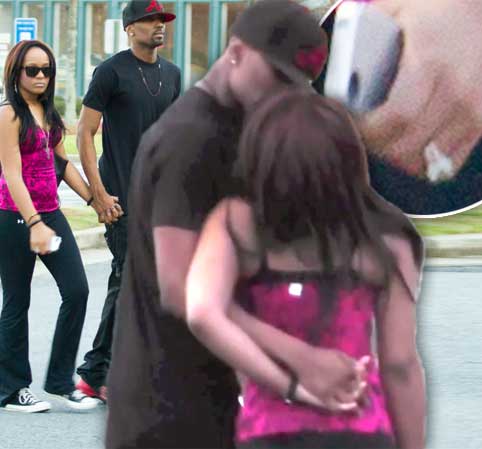 Bobbi Kristina Brown isn’t letting her family’s drama get in the way of her happiness. Whitney Houston’s daughter is said to be engaged to her “adopted brother” Nick Gordon, Us Weekly reports.

Brown, 19, was recently photographed in Atlanta holding hands and kissing Gordon, the 22-year-old man whom Houston took in 10 years ago after his mother was unable to care for him. According to the magazine, Brown has been wearing a sizeable diamond engagement ring that was once worn by her mother.

“The situation is beyond sad,” a source told Us. “Whitney never formally adopted Nick, but he lived with her and Bobbi Kristina from the age of 12 and they were raised like brother and sister. Nick came from a really bad background.” In addition to their alleged plans to wed, the couple is reportedly living together in one of Houston’s Atlanta properties. “Bobbi Kristina is still so vulnerable since her mother passed away,” the source added. “But Nick has become like her rock.” Not surprisingly, Brown’s family is said to be “really upset” about the young couple’s blossoming romance.

Namely, Houston’s mother has voiced her disapproval. A friend of Cissy Houston told TMZ that the family matriarch said “what they’re doing is incestuous.” She is reportedly afraid Gordon is a bad influence on Brown, and wants him evicted. After rumors that the two are dating surfaced earlier this month, Gordon took to Twitter to slam haters. “Yea we got a little closer and what!” he wrote. He later added, “For the stupid ppl out there, she gave birth to 1 child. And she trusted me with Everything!” On Wednesday, Gordon told ABCNews.com that he and Brown are “just close – just going through her mom’s passing and grieving together.”

During her interview with Oprah Winfrey on last Sunday’s “Oprah: The Next Chapter,” Brown was seen wearing the alleged engagement ring as she spoke about her famous mother’s passing. “I’m doing as good as I possibly can at this point. I’m just trying to keep going,” she said. “I can sing her music, but to hear it now, I can’t. I can hear her voice telling me, ‘Keep moving, baby. I got you.’ She’s always with me. I can always feel her with me. She used to always say, ‘Do you need me?’ And I said, ‘I always need you.'”