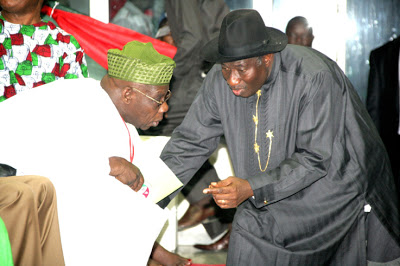 Fresh facts have emerged as to the posibble origins of the purported rift between former president Olusegun Obasanjo and incumbent, Dr. Goodluck Jonathan. According to Kaduna-based human rights activist, Mr. Shehu Sani, Obasanjo fell out with President Jonathan due to his refusal to engage Boko Haram in dialogue instead of use of force.

Sani, who is the President of the Civil Rights Congress, while speaking with reporters in Kaduna on Sunday, said when the government was seeking solutions to the end of bombings and killings allegedly perpetrated by the violent Islamic group in the North, Obasanjo decided to visit families of the sect’s leaders in Maiduguri to negotiate with them on the crisis and how it could be resolved.

He said, “Their (Obasanjo and Jonathan) problem started with the issue of Boko Haram. I facilitated the dialogue between the former President and Boko Haram members’ families.

“We went to Maiduguri to meet with their families and they presented a list of suggestions, which they thought could end the crisis.

“We sat down with them in the mosque of the founder, Mohammed Yusuf.

“They brought out pictures of their members and gave them to Obasanjo; they brought several documents of military and police brutality against them and the members of their families, where they were molested and killed.

“They gave them to Obasanjo. The former President then gave them his word and his honour that he would do everything to ensure that justice was done.”

Sani added, “The same day we left Maiduguri in a helicopter and Obasanjo went back to Abuja and I knew very well that he was able to deliver such (Boko Haram’s families’) demands.

“I think the late Andrew Azazi played a key role in frustrating Obasanjo’s effort because he, at that time, believed that the security agencies would silence the group. And he misinformed the President to go to South Korea during a nuclear summit and tell the whole world that by June last year the problem of Boko Haram would come to an end.

Sani lamented that despite Jonathan’s promise and deadline, the crisis had persisted.

He said, “They miscalculated because up till today the insurgency persists. As I am talking to you, violence is going on in Kano, Gombe and Maiduguri.

“From that point I have not seen any cordial relationship between Jonathan and Obasanjo.

“Thereafter the issue of Obasanjo’s resignation from the Peoples Democratic Party Board of Trustee came up. I believe that Obasanjo discovered that he was no longer relevant and weighty in the party and government.

“His godson, Jonathan, had found his feet and created his own caucus. The PDP is such a party that always dances to the tune of an incumbent President.” And this is one of the biggest problem of the party today.”