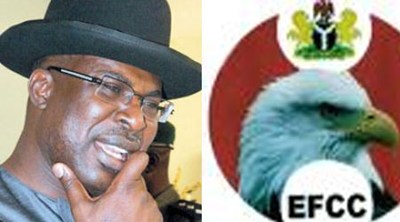 The last has not been heard of the drama regarding the seizure of 48 houses in Abuja purportedly owned by former Bayelsa state governor, Timipreye Sylva, by the Economic and Financial Crimes Commission, EFCC, as a business woman identified as Amaba Sam-Ogbuku, on Tuesday, appeared before an Abuja Federal High Court to lay claim to one of the houses.

Sam-Ogbuku, who applied through her counsel, Mr. Ajayi Olowo, to be joined in the matter, told the court that she was the owner of the property on No. 1, Mubi Close, Plot 766, Cadastral Zone A01, Garki 1, Abuja, which the EFCC listed as one of the properties it seized from Sylva.

Informationng.com reports that the Abuja FHC, presided over by Justice A. R. Mohammed, had on December 21, 2012, granted an interim order which empowered the EFCC to take possession of about 48 houses alleged to be owned by the former governor.

The development was tied to the EFCC’s prosecution of the former governor over a six-count of money laundering and advance fee fraud, amounting to N6.4bn, before another Abuja FHC, presided by Justice Adamu Bello.

Sylva had denied ownership of some of the property which the anti-graft agency said belonged to him.