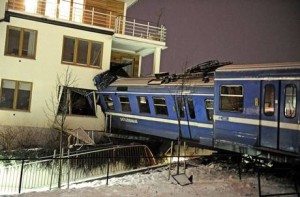 A cleaning lady stole a train and drove it off the end of the tracks, smashing it into a house in Sweden on Tuesday, injuring only herself in an incident police are investigating.

It was not clear how the woman, around 20, got access to the key needed to start the train. She was taken to hospital with serious injuries, but the train was carrying no other passengers as it was in the early hours and no one in the house was hurt.

“The cleaner drove the train at high speed, considerably higher than normal on that stretch, to where the rails end and crashed into a house,” said Jesper Pettersson, spokesman at Stockholm Public Transport (SL).

The train ploughed past the end of the line and vaulted over a street separating the house from the depot, crashing through a balcony and into a downstairs room in the upscale suburb of Saltsjobaden. SL and police were investigating how she had gained access to the cabin and being able to drive the train. [Reuters]