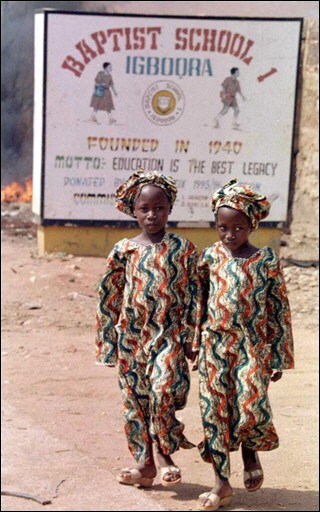 Igbo-Ora, a sleepy farming community in southwest Nigeria, welcomes visitors with a sign proclaiming “The Land of Twins”.

“There is hardly a family here without a set of twins,” said community leader Olayide Akinyemi, a 71-year-old father of 12, as he settled a dispute between two neighbours.

“My father had 10 sets, while I had three sets. But only one set, a male and a female, survived,” he said. The town’s high incidence of twins has baffled fertility experts — underscoring a more regional twin trend and an array of elaborate African rituals around them.

The rate of identical twins is pretty steady throughout the world at about 0.5 percent of all births, according to a 1995 study by Belgian researcher Fernand Leroy, who has worked extensively on twins. But West Africa bucks that trend, particularly with a much higher incidence of fraternal, or non-identical twins than in Europe or Japan.

That is especially true, experts say, amongst Nigeria’s Yoruba community which is largely concentrated in the southwestern part of the country where Igbo-Ora is located. Overall, almost 5 percent of all Yoruba births produce twins, the Belgian study said, compared with just around 1.2 percent for Western Europe and 0.8 percent for Japan — although fertility drugs in the developed world are changing those figures.

Yam consumption may be one explanation for Africa’s largesse, some West Africans and Western experts believe. Yams contain a natural hormone phytoestrogen which may stimulate the ovaries to produce an egg from each side. For their part, Igbo-Ora’s residents appear nonplussed about their twin phenomenon. Some like Akinyemi support the yam theory — and point specifically to the reputedly high oestrogen content of agida, the local name for yam tubers.

“We eat a lot of okro leaf or Ilasa soup. We also consume a lot of agida. This diet influences multiple births,” he said. Others are not so sure. “The real cause of the phenomenon has not been medically found,” said Akin Odukogbe, a senior consultant gynaecologist with the University Teaching Hospital (UCH) in Ibadan, the nearest big town. “But people attribute the development to diet,” he continued, adding that studies have shown that yam can make women produce more than one egg which can be fertilised.