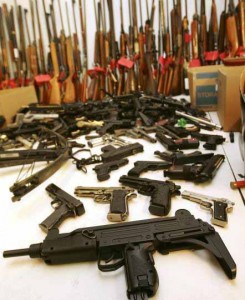 The 15 Russian sailors charged with alleged unlawful importation of arms to Nigeria have been granted bail by Justice Okechukwu Okeke of a Federal High Court sitting in Lagos.

The defendants were released to the Russian Ambassador in Nigeria by the judge as a bail condition and also granted bail to the vessel “MV Myre Seadiver” in a bond of 500,000 dollars to be obtained from First- Bank Plc. The Russian nationals were charged together with their vessel on four counts, bordering on alleged unlawful importation and possession of firearms, as well as non declaration of the content of the vessel and they had pleaded not guilty to the charges.

At the resumed hearing of the matter on Monday, counsel for the defendants, Mr Chukwuwike Okafor informed the court of his pending application for bail of the defendants, urging the court to make an order admitting all the defendants and their vessel to bail since the essence of bail was aimed at securing the defendants’ attendance in court for trial.

Justice Okeke subsequently asked the prosecution to state the conditions under which he thinks the defendants should be admitted to bail. However, the prosecutor, Ernest Ezebilo, in response stated that for the sake of overriding public interest, the defendants should be released on bail to the Russian Ambassador in Nigeria, who will undertake to produce them as the need arises