Two hundred thousand counterfeit soccer balls originating from China have been seized at the Brazilian port of Santos, the South American country’s tax authorities said in a statement. 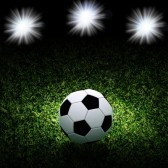 The balls included imitations of the Jabulani model, the ball used at the 2010 World Cup, and the Cafusa, which will be used at the Confederations Cup in Brazil in June.

Brazil’s Inland Revenue Service said the balls were apprehended at the port as part of “Operation Protected Frontiers” and would be destroyed.

No arrests were reported.

Piracy of official merchandise is common in Brazil, which will host the 2014 World Cup, with dozens of street vendors selling fake replica shirts and other products near stadiums on match days.

The public often complain of the high price of official merchandise, however. The latest replica shirts of Brazilian club teams cost around 200 reais ($102), a large chunk of the country’s minimum monthly wage of 670.95 reais.