Officials of the Lagos State Task Force on Counterfeit, Fake Drugs and Unwholesome Processed Foods have shut 32 illegal drug shops and carted away fake drugs worth millions of naira. 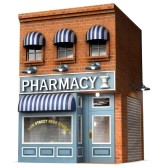 The raids were carried out in Ikorodu Local Government areas of Lagos, Southwest Nigeria.

Our Sources gathered that the officials combed Ikorodu in search of illegal drug stores and shut those found wanting.

The raids were conducted in conjunction with the Pharmaceutical Society of Nigeria (PSN), the Pharmacist Council of Nigeria (PCN), National Agency for Foods, Drugs Administration and Control (NAFDAC) and the Nigeria Police from the state command.

Special Adviser to the Lagos State Governor on Public Health, Dr. Yewande Adeshina said the shops were sealed for various offences contrary to the provisions of the law on the operation of pharmacies and patent medicine stores in the state.

“Government’s action was informed by the dangers posed by the nefarious activities of illegal operators of patent medicine/pharmaceutical stores in the state. The exercise is coming on the heels of the state government’s sanitization efforts to check the activities of illegal operators, drug adulterators and infiltration of the drug market by imported and locally produced sub-standard drugs by stream lining the drug distribution system in the state.

“The shops were sealed off for offences ranging from sales of drugs without licence from the regulatory authority; failure to relocate from a market area/adherence to the mandated distance between a patent medicine shop and market place as stipulated by the law and sales of counterfeit and fake drugs amongst others.

“Government is committed to streamlining the drug distribution system in the state in order to ensure the safety of the citizenry, hence it has mandated the Task Force on Counterfeit, Fake Drugs and Unwholesome Processed Foods to comb all nooks and crannies of the state for illegal operators,” she stated.

The special adviser urged operators of pharmaceutical and patent medicine stores to ensure that their activities were within the ambit of the law regulating their operations just as she urged the people to always patronise only registered pharmacy or patent medicine shop recognised by their signboards.