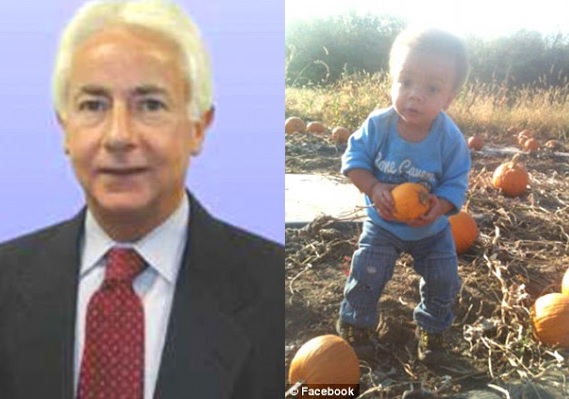 A man has been accused of racially abusing then physically assaulting a 19-month-old child on a flight to Atlanta last Friday.

Joe Rickey Hundley, 60, allegedly demanded that the mother of the crying toddler should ‘shut that n****r baby up’ before slapping the infant in the face on the Delta flight on February 8.

According to The Smoking Gun, Hundley has been charged with simple assault after the incident with Jessica Bennett, 33, and her son Jonah.

Bennett told authorities that her son ‘started to cry due to the altitude change’ as the service from Minneapolis to Atlanta prepared for landing.

Ms Bennett and her adopted child shared a seat on their way to a family funeral while Mr Hundley was in the neighboring seat.

Bennett said she was unable to stop the infant crying. A report compiled by FBI Agent Daron Cheney alleges that Hundley turned to the mother and used the racial slur in telling her to shut up the child.

As reported by The Smoking Gun, Hundley then ‘turned around and slapped’ the toddler in the face ‘with an open hand, which caused the juvenile victim to scream even louder.’ According to the mother, the slap ’caused a scratch below [the child’s] right eye.’

Hundley was charged with simple assault in federal court in Atlanta this week. If convicted the man faces a maximum of one year in prison.
The 60-year-old, who is the president of an aircraft parts manufacturer based in Idaho, denied slapping the child or using racial language. He claims that he did ‘ask the mother to quiet the child.’

Hundley said he was traveling to Atlanta to visit a hospitalized relative, described his emotional state as ‘distraught’ and that he had one alcoholic drink on the aircraft.

However, Bennett told The Smoking Gun that she believed Hundley was intoxicated. The mother said that he ‘reeked of alcohol’, was ‘stumbling around wasted’ and he consumed several double vodkas during the flight.

Bennett says Hundley told her that Jonah was too big to be a ‘lap baby.’
Agent Cheney added that Bennett received help from other passengers on the Delta flight. Todd Wooten, who was seated 12 rows ahead, told authorities that he ‘heard derogatory language coming from the rear of the aircraft’ and went to see what was going on.

‘According to Mr. Wooten,’ Cheney wrote, ‘he saw Joe Rickey Hundley strike’ the child.
Hundley pleaded guilty to a misdemeanor assault in a Virginia court in 2007 after he was arrested following a quarrel with his girlfriend.

He was first charged with simple assault, carrying a concealed weapon, and public intoxication. Hundley told The Smoking Gun that the weapon he was allegedly carrying was a corkscrew.