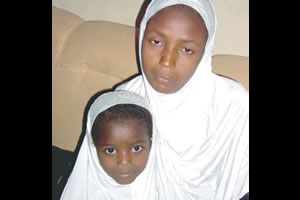 A three-year-old girl is amazing Nigeria after memorizing the whole Qur’an, becoming one of the youngest Muslims in the world to learn the Noble Book by heart.

“Honestly, I can’t say much but I am very grateful to Allah for this,” Sayyada Maimunatu Sheikh Dahiru, the girl’s mother, told our newspaper on February 10.“This is indeed a blessing from Allah.”

Her daughter, Rukkayatu Fatahu Umar, has completed the memorization of the Noble Qur’an at the age of three year and eight months.  The young Muslim girl began memorizing the Noble Book at an Islamic school founded by prominent Sheikh Dahiru Usman Bauchi. “We were using a big parlor, which was divided into classes for the learning of the Qur’an,” Maimunatu, who teaches at the school, said.

“At that time, I always carried her on my back while teaching. From there, she started reciting along with the students and before long, she had memorized some verses.

“That was how she started attending memorization class. Right now, she has completed memorizing the whole Qur’an,” the proud mother said. The Noble Qur’an is consisted of 114 Surah (chapters) of varying lengths. Going to the school between 7a.m. and 6p.m. daily, the young girl found little time to play with her peers.

“It is not as if she does not play with her mates. She does, especially with those who are memorizing the Qur’an like her,” Maimunatu said. “This makes it easier for them, as their focus and attention are directed towards achieving the same goal, which is memorizing the Qur’an.”

The young Muslim girl is now preparing to go to school soon, breaking a family tradition of sending girls to study at the age of ten. “My husband has, however, said that the world is changing now, and that there is civilization all over the place,” the mother, who herself memorized the whole Qur’an at the age of 12, said.

“As such, our daughter will have the opportunity of going to a proper school whenever she reaches the age of six.” The Muslim mother has paid tribute to her father for offering her child the chance to memorize the Qur’an at this young age. “I’m also grateful that I have a father like Sheikh Dahiru Bauchi, who planted my feet, like other people, on the path of Islam,” she said.