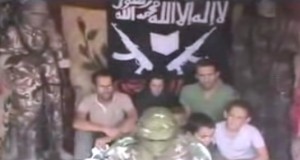 In reacting to the demands by the dreaded Boko Haram group on the conditions under which they can release the French citizens being held hostage by them, the Defence Headquarters (DHQ) has told the members of the sect to channel their demands through the Joint Task Force (JTF) telephone help lines, which they are conversant with.

In the reaction to the demands, the Defence spokesman, Colonel Mohammed Yerima, said the video clip on the YouTube purportedly released by the Boko Haram could not be relied upon, as it did not hold water. According to him, the Defence Headquarters did not make official response to video on the YouTube.

Meanwhile, on the deployment of troops in Mali, the spokesman said so far, over 1,200 officers and men had been deployed in the African-led International Support Mission to Mali (AFISMA).

He said the last batch, comprising 162 troops, were airlifted on Wednesday by the Nigerian Air Force, while Charlie (C-130) aircraft provided by the British government would equally support the operation, side by side Nigerian C-130.