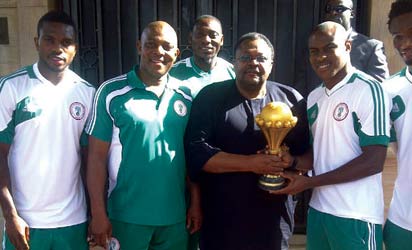 As a result of the grey areas in his contract with the Nigerian Football Federation (NFF) which led to his purported resignation from the job of coaching the Super Eagles, Stephen Keshi is to become the proud owner of a Range Rover Sport automobile and posh apartment in Lagos state courtesy of mobile telecommunications’ giants – Glo’s Chairman, Dr. Mike Adenuga Jr (GCON).

The billionaire publicity-shy business mogul also gave the victorious Super Eagles $1million for their exploits in the just concluded AFCON in South Africa with Keshi receiving a princely sum of $200,000 in addition to the largesse. Dr. Adenuga also promised to take up Keshi’s month salary which has been a constant source of friction in the past between the glass house and handlers of the national team.

It would be recalled that Keshi reportedly complained that the NFF owed him a backlog of salaries, deprived him of his officials cars among other things that led to his now controversial resignation saga.