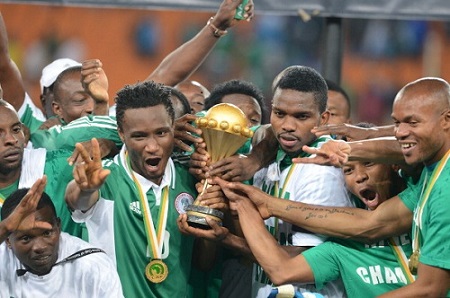 Nigerian football officials have disclosed that weeks after the Super Eagles won the African Cup of Nations in South Africa, the Confederation of African Football (CAF) is yet to remit to the cash value of $1.5 million (about N240million) to the champions.

At the grand celebration in Johannesburg on February 10, CAF only openly handed Nigeria the gold plated trophy as well as  gold medals to the players and technical officials without a dummy cheque – as is the practice- indicating the total cash prize due the winners.

A member of the Nigeria Football Federation (NFF) board Dr Shehu Adamu, conformed Monday night that the ‘Glasshouse’ was yet to receive the prize money from CAF two weeks after Nigeria won the continent’s biggest football showpiece.

Adamu, who is the chairman of NFF Finance and Appropriations Committee, said: “We have not received any alert from CAF regarding the Africa Cup of Nations prize money. We have sent our account number to them and the money is yet to hit the account. We are still waiting for them to pay the money”.