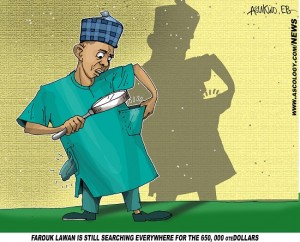 After so much hide-and-seek and waiting games, the Federal Government has arraigned the former chairman of the House of Representatives Ad Hoc Committee on Fuel Subsidy probe, Honourable Farouk Lawan and one Boniface Emenalo before Justice Mudashiru Oniyangi of an Abuja High Court.

The embattled lawmaker is being arraigned over a seven-count criminal charge bordering on the bribe of $620,000 from an oil magnate, Femi Otedola, in order to doctor the report of the committee in favour of Zenon Oil and Gas.

It will be recalled that, in the wake of the oil subsidy crisis, the House of Representatives set up an ad hoc-committee headed by Lawan to probe the oil subsidy regime. The committee had indicted some firms and individuals of short-changing the subsidy regime to the tune of N1.7 trillion and it consequently recommended their prosecution by the Economic and Financial Crimes Commission.

However, oil magnate, Otedola, had alleged that the Lawan-led adhoc committee demanded $3 million out of which he paid $0.6 million as gratification in order to strike out the name of his company, Zenon Oil, from the list of indicted firms. The Federal Government had brought out the charge through the Director of Public Prosecutions of the Federation, Mrs O.O. Fatunde, on behalf of the Attorney General of the Federation and Minister of Justice, Mohammed Adoke. The Federal Government has also briefed a private prosecutor, Adegboyega Awomolo to prosecute Lawan under the ICPC Act.