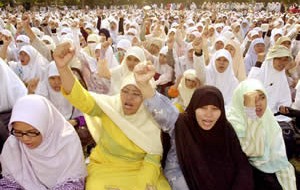 All of Sheikh Mohammed bin Rashid Al Zayed Khalifa’s forty wives got their period at the exact same time, various Arab media are reporting. In what is being described as one of the most unfortunate events in recent UAE history, the PMS calendars of the Sheik’s wives became synchronized and created a terrible headache for everyone involved.

His Highness Sheikh Mohammed bin Rashid Al Zayed Khalifa, one of the richest men in the United Arab Emirates, first heard about the disaster from his eunuch, sources within the palace report. In the meantime, the troubled man managed to answer a few quick questions from media representatives.

“Back when I only had two wives I could maybe handle a couple of mood swinging, bloated, depressed, angry and resentful chocolate-eating monsters at a time, but with just one more than that you’re as good as dead. I was convinced that this would never happen with all forty of them at the same time – I mean, what are the odds?” the grief-stricken ruler asked.

Palace representatives said that the harem would be put under quarantine for the next several days in order to avert a greater catastrophe, and that the Sheikh would do the same thing any other man would do in similar circumstances, “hide somewhere until it all passes.”

One of the Sheikh’s wives spoke to reporters about the mood inside the palace. “How is it even possible to cycle through every human emotion in one day?It’s so exhausting. And we get no support from our husband. None of us even give a damn if he comes back unless he brings us mass quantities of chocolate covered peanut butter balls,” Adara al-Sadah, wife number 28, was quoted as saying.

The Arab billionaire stated in the end that “having a harem can easily transform from being every man’s sweetest dream to every man’s worst nightmare.”