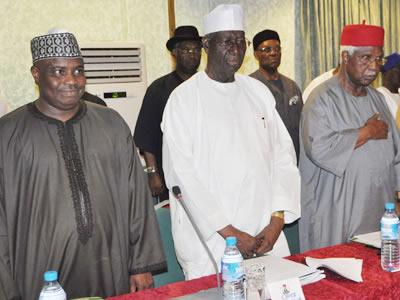 Former Minister of works, Chief Tony Anenih in the early hours of today, was unanimously elected Board of Trustees (BoT) chairman of the ruling Peoples Democratic Party (PDP).

In a meeting of the party held at the Banquet hall of the presidential villa, Abuja and attended by President Goodluck Jonathan; vice president Namadi Sambo; Secretary to Government of the Federation, Anyim Pius Anyim; Senate President, David Mark; Speaker Aminu Tambuwal among others, Anenih’s emergence as BoT chairman brought to an end a protracted battle for the coveted seat.

Anenih, who is currently the chairman of the Board of Directors of the Nigeria Ports Authority (NPA), is having his second stint as the PDP BoT chairman, confirmed the widely held speculation that he was President Goodluck Jonathan’s anointed candidate for the position.

Anenih emerged unopposed as a consensus candidate in accordance with the Prof Jerry Gana led committee report on streamlining the membership of the BOT. The meeting, held at the Banquet Hall of the State House, commenced at 8.45 and ended in the early hours of Tuesday.