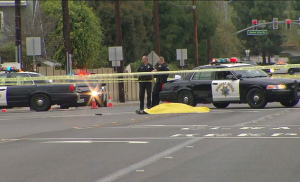 At least three people are dead after a shooting spree stretching from Ladera Ranch into Tustin and Orange.

It all started around 5:20 a.m. Tuesday when Orange County sheriff’s deputies responded to a call from a home on Red Leaf Lane in Ladera Ranch.

One female was pronounced dead at the location, according to sheriff’s spokesman Jim Amormino.
The suspect, a male in his 20s, fled in an SUV into the Tustin area, where there were multiple shootings, Amormino said.

He added that there is not any immediate threat to the community, but could not provide additional details on the suspect’s status.

There appeared to be at least five other crime scenes across Tustin and ending in Orange, right near Villa Park.

There was another scene at the intersection of El Camino Real and Red Hill Avenue. That scene appeared to involve a black SUV just outside a Shell gas station.

A third scene was at the McFadden Avenue off-ramp from the southbound 55 Freeway. The off-ramp was shut down for the investigation.

There was a fourth crime scene on the east side of the 55 Freeway at the Micro Center electronics store at Edinger and Del Amo avenues.

One person was deceased in the parking lot, and another was reportedly wounded and transported to a local hospital.

Police were also investigating in the 13800 block of Orange Street, just west of Tustin High School.
The exact sequence of events remains unclear, as does the motive for the initial shooting. Check back for updates on this developing story.