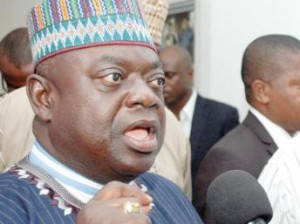 Governor Babangida Aliyu of Niger State has said the formation of the All Progressive Congress (APC) is a wakeup call to the Peoples Democratic Party (PDP), insisting that the political terrain in the country will be better for it.

Speaking at the main auditorium of the Government House, Minna, on Wednesday, when he inaugurated new members of the state executive council, Governor Aliyu said the merger of some political parties could lead to the institution of two party system in the country, where one party would not be too sure of winning any election at the general poll.

The governor further argued that Nigerians would also have a choice of which party they will cast their votes for during any election, adding that those that had the misconception that they could rule forever would also be told by the people that there was an alternative. He however enjoined the PDP to put its house in order and continue to do what the people wanted, while explaining that with the merger of these political parties, the PDP must go out and compete favourably for the minds of the people.