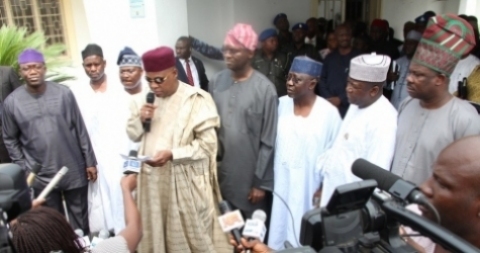 The crisis rocking the All Progressive Grand Alliance (APGA) took a dramatic turn when Senator Annie pronounced the party dead.

Reacting to comments by some national executive members of APGA disassociating the party from the merger, Okonkwo, who represented APGA at last Wednesday’s conference where the new opposition party was unveiled, said the decision to join the coalition mega party was a done deal and so told the executives to either join the Peoples Democratic Party, PDP, or any other party of their choice.

Senator Okonkwo further stirred the hornet’s nest when he made reference to Governor Rochas Okorocha of Imo state as the leader of the party and cited his endorsement of APGA’s alliance with other opposition parties as proof of the death of the party.

“When the governor of the party has come up to say openly that he is part of the merger, who has the party? Do you know that the truth of the matter is that a lot of PDP people are going to be involved here?

“It is a mega party being formed, it is a merger, don’t be surprised that you will see some ACN people trying to say that they don’t want to be involved and they want to join another party or the PDP. This is the way the leadership of the party moves.

“If some people are saying that they will join the PDP what will you do? Will you go and force them? With this merger, all the parties involved have ceased to be. Is APGA bigger than ACN, or is it bigger than CPC or ANPP,”  he rhetorically asked.

Senator Okonkwo added that the APC is a credible party that will provide purposeful leadership that Nigerians can be proud of and further enjoined people from the South East to join the party as it is only through it that they can fulfil their ambition of producing a president of Igbo extraction.