The Nigerian Army has denied reports that its troops killed four students of the Nasarawa State University who were protesting lack of basic amenities in the institution, adding that its soldiers did not shoot any of the students during the protest.

“On February 25, 2013, students of Nasarawa State University came out en mass and barricaded the Keffi-Akwanga expressway, which is part of the 177 Guards Battalion patrol routes. This road was blocked with logs of wood and burning tyres which hampered vehicular movement, leaving travellers stranded for hours and numerous vehicles damaged by the violent crowd.

“It was also reported that the irate crowd were looting travellers’ belongings and throwing stones, bottles and metal objects at the security operatives. However, it is believed that the protest was hijacked by some hoodlums and cult members who are students of the university.

“It is important to note that the combined efforts of the troops in conjunction with other security agencies assisted in dispersing the crowd and removing the blockades from the road to ease movement of vehicles. Presently, law and order have been restored in the area and troops are closely monitoring the situation.” 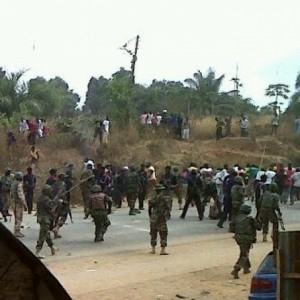 “You are aware of the problem of communal clashes in Nasarawa State. Troops are on patrol to checkmate the killings and violence, so the Vice Chancellor did not need to invite soldiers on patrol who ran into the blockade on a major highway and were engaging in violence,” Attahiru said when asked why soldiers, and not police were called to quell a students’ riot.

“In any case, let me repeat, our troops did not shoot any student during the protest. We are very well trained professionals. Since we did not use live ammunitions, I do not know how we would have shot anybody. Our troops were not in any way involved in the shooting.”