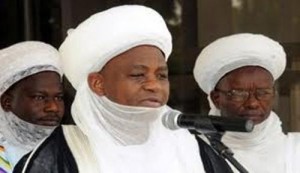 Sultan of Sokoto Alhaji Sa’ad Abubakar, has pleaded with beggars in the society not to add to their woes by marrying many wives.

The Sultan who said that it was wrong for people who had burdens beyond they could bear to compound it by marrying many wives, spoke in Sokoto Friday, during the inauguration of district-level committees of the State Zakkat and Endowment.

The Sultan spoke as the state Governor,  Aliyu Wamakko disassociated Islam from begging. “The act of begging is not allowed in Islam and this is tarnishing the image of the religion,” Wamakko said.

In the same vein, Sultan Abubakar challenged Islamic clerics in the country to continue to preach to their congregation on the prohibition of begging by Islam. Fazed by the prevalence of begging in the state despite the N6,500 monthly allowance paid to 6,739 physically challenged persons by the state government, the Sultan advised them not to over burden themselves as it was difficult to sustain them.

“We should always live our lives according to the dictates of the Islamic religion. No Muslim is supposed to go to bed with an empty stomach with Zakkat and endowment institution.

“We should assist all Nigerians irrespective of religion or ethnicity. We should always be our brother’s keeper,” the Sultan said, adding however, that other indigent Nigerians, irrespective of their religion, must also be assisted.