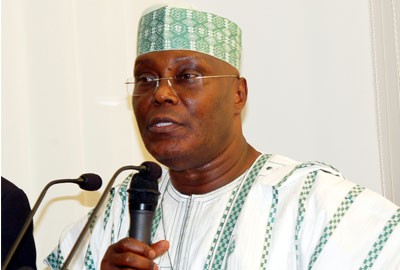 Former Vice-President and ACN Presidential candidate in the 2007 general elections, Alhaji Atiku Abubakar, has faulted government’s funding of religious pilgrimages saying that it should instead focus on regulating the process.

Atiku who was a guest at the 10th Anniversary Public Lecture of the Sun newspaper entitled “Religion, Strife and the Future of Democracy in Africa” stated that in the old Northern Region, “people went to Saudi Arabia but we did not have a pilgrim’s board”.

He said: “I remember when I was a vice president, I drafted a law for us to just have like a regulatory body to make sure we appoint agents who are responsible for taking care of pilgrims when they go to Saudi Arabi or Jerusalem or wherever they want to go.

“But, at the end of the day at the Ministry of Foreign Affairs, we have a section that does Christian welfare board, Muslim welfare board. It is not a regulatory agency we are having.”

Speaking on the religious crises that bedevilling the country, Atiku refuted the general assertion that they were instigated by poverty.

He continued: “Somebody spoke about poverty; yes, it is true that poverty can drive young people particularly to go into crime. Because as far as I am concerned what they do is crime, it is not religious. But in the First Republic we also had poverty. The level of our education at that time is not like we have today. So was it that we never had suicide bombers like we have today? It is true that with more education and more jobs we will get the kids off the streets and the violence will be minimal.

“But, all the same, I think Nigeria is unique across the world. It is about the only country in the world where you have almost an even population of Christians and Muslims living together in peace. There is no country in this world like Nigeria.”

He added that time has vindicated him over his description of sharia law as championed by some governors in the past as “political sharia” which will fade out with time.

Recalling how he was labelled “Reverend Abubakar”, he lamented how politicians use religion to seek votes.

“I remember when they brought sharia: I told the president that this is political. Some politicians used it to win election and go. Where is the sharia today?” he asked. “They forgot that in Northern Nigeria when we had Sir Ahmadu Bello we did not have sharia. Yes, we had some elements of Islamic laws governing inheritance and marriage, but we had hitherto Northern Nigeria. So this is where sometimes, if we are not careful, politicians will play on our intelligence.”

The former VP in his earlier remark described the topic of the lecture as apt and timely and drew his audience’s attention to the various challenges faced by the African continent which include “ethnic, religious and regional conflicts” and called for an urgent need to “quickly and decisively tackle these conflicts, whether they are religious or otherwise, not only to stem the needless waste of lives and property but so we can also focus on developing our human and material resources to provide our people better lives”.

“As leaders, we must avoid trying to score political points with the very serious security challenges facing us but rather show responsible leadership and commitment in searching for solutions to them wherever that search takes us,” said Atiku