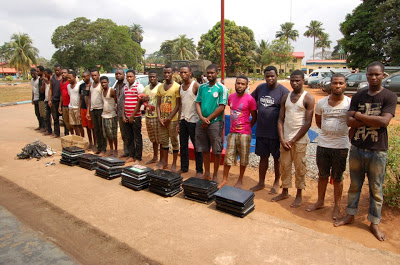 EFCC Press Release on 20 internet fraudsters otherwise known as ‘yahoo-yahoo boys’ who were nabbed in Benin City with 45 laptops:

The Economic and Financial Crimes Commission, EFCC, has arraigned nine of the twenty suspected internet fraudsters arrested and handed over to the Commission by the Joint Task Force of the 4 Brigade of the Nigerian Army, Benin. They were arraigned before Justice A. M Liman of the Federal High Court 1, Benin on separate charges bordering on conspiracy to commit felony to wit: obtaining money under false pretence. They pleaded not guilty to the charges.

Justice Liman granted the accused persons bail in the sum of N1million each and two sureties in like sum. One of the sureties must be a civil servant and the other must own a landed property within the jurisdiction of court. He ordered that the suspects be remanded in prison custody and adjourned to 4th, 13th and 19th of March respectively.

The fraudsters were arrested on January 18, 2013 when men of the Joint Task Force, 4 Brigade, Benin in a surprise raid, stormed their cyber office tucked in an old building located on Siluko Road, Benin City. They were subsequently handed over to the Commission for further investigation and prosecution.

At the point of arrest, the fraudsters had in their possession forty five (45) laptops of different make, twenty eight (28) telephone sets, eight (8) internet mobile modems and one Nissan car with registration number USL 375 AG.