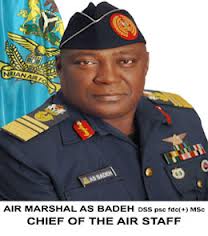 The Nigerian Air Force (NAF) has described as deceptive, a newspaper headline in a news report titled ‘Democracy Breeds Boko Haram’ that was credited to the Chief of Air Staff, Air Marshal Alex S Badeh.

The headline appeared on February 16 and was said to be misleading in some dailies.

Director of Public Relations and Information of the Air force, Air Commodore Yusuf Anas, said that while the caption was catchy to attract attention, it was equally misleading and capable of sending wrong signals to the public about the commitments of the Nigeria Air force towards the entrenchment of democracy in the country.

While acknowledging that the content of the news story was a true account of what the chief of air force said, Anas added that the caption was misleading as well as injurious to the sensibility of thousands of service men and women who put their lives on the line every day, combating the Boko Haram menace.

“It is more curious that the content of the story is totally at variance with the caption. Furthermore, the NAF as a responsible member of the Nigerian Armed Forces and its commitment to the Nigerian project will in no way through its leadership condone the perpetration of any act of illegality in any disguise and by anybody,”  the statement read.

In the report, the chief was also quoted as saying, “I want to tell you that the security situation we are having here is not peculiar to Nigeria alone, it is part of democracy.”