Dead Butchered Woman Found In Duffel Bag At A Grocery 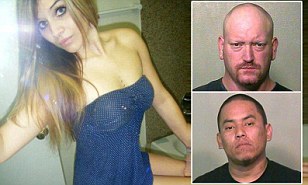 All sorts of weird stuff can be found behind some grocery stores, but no one thought the duffel bag contained the body parts of a dead woman.

Two men were charged Monday in the death of an Oklahoma woman whose body was found dismembered in a duffel bag behind a grocery store last year.

Jimmy Massey and Luis Ruiz were being held without bail in the Oklahoma County Jail. The office of Oklahoma County District Attorney charged them with first degree murder in the killing Carina Saunders, who was 19 years old. Her body was discovered in a duffel bag discovered by animal welfare workers, as they picked up cats in Bethany, a suburb of Oklahoma City.

The coroner’s office said Saunders has died a violent death, but has not disclosed details.

Massey was already in custody on charges related to drugs. He appears to be represented by a lawyer in his drug case, Mitch Solomon, who did not return a message seeking comment.

A jailer said he had no information on whether Ruiz had hired a lawyer to represent him on the murder case.

According to an affidavit, a witness told police in Bethany that Saunders went to a house in south Oklahoma City, where Ruiz beat Saunders and tied her up. The witness said Ruiz dragged Saunders into an upstairs room, tied her to a table and cut off her left leg. She said he also tried to cut off her right foot, but broke the saw.

That witness jumped out of a window to escape the ordeal, the affidavit said.

Another witness told police someone told her that the murder had been recorded on a mobile phone. She said she was with Ruiz in a hotel, looked at his phone while she was in the bathroom, she saw video of the killing and recognized Ruiz as the person who was cutting the foot of Saunders, according to the affidavit.

Another statement said that Massey told police she was present when Saunders died and saw what happened.

But police said she told another jail inmate that she was actually involved in the murder and provided details only the police and the coroner’s office known.

Bethany Police Chief Phil Cole said the killing of Saunders was tied to human trafficking, prostitution and a drug gang.