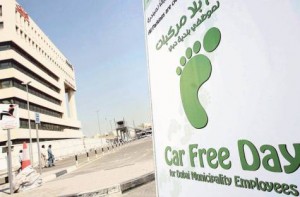 Nearly 7,000 employees both from the public and private sector are expected to use public transport while commuting to work on Wednesday as part of Dubai Municipality’s initiative to mark Car Free Day 2013.

The initiative is aimed at contributing to the reduction of carbon emissions and spreading awareness about global warming and the methods of controlling it.

“The car parks of all participating parties will be closed throughout the day, so employees will have to use the Metro or the bus to get to work. An awareness campaign will also be held on Wednesday on the importance of using public transportation,” Hussain Nasser Lootah, director-general of Dubai Municipality announced at a press conference on Sunday.

As many as 27 government departments and institutions, including the American University in Dubai and Dubai Health Authority, are participating in the initiative that is being held in its fourth consecutive year which falls on February 13.

“We also aim to have a new achievement for Dubai as an eco-friendly city through the registration of this initiative in the name of Dubai locally and globally, as the initiative receives a larger response each year from the government and private sector organisations,” he said.

Lootah pointed out that in 2012, 18 organisations participated in the initiative and that 3,500 vehicles were not used — resulting in a reduction of 10.5 tonnes of carbon emission.

“As part of our contribution in reducing carbon emissions, we want to participate further with the Roads and Transport Authority and provide bus services to our gated communities and encourage residents to use public transport. Last year, 200 staff took part in Car Free Day and we expect 100 more this year,” said Khalid Al Malek, chief executive of Dubai Properties Group. 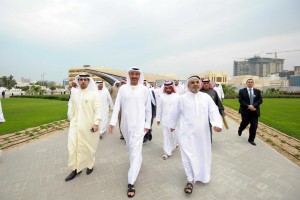 Participants also stressed that although such initiatives to reduce carbon emissions is vital, organisations should responsibly carry out environmental initiatives throughout the year in their respective fields.

“We recycle the waste of Emirates airlines on a daily and a weekly basis, such as plastics, aluminium cans and paper. We compress it and then hand it over to the municipality to recycle,” added Mohammad Ahli, director-general of Dubai Civil Aviation Authority. [GN]