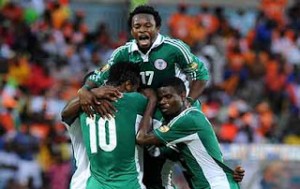 As the Super Eagles line up to face Burkina Faso in the 2013 African Cup of Nations, AFCON final, ex-internationals have been giving their advice on what the Nigerian team can do to be victorious in the final match.

Austin Eguavoen who was stand-in captain for Stephen Keshi at the 1994 Nations Cup in Tunisia spoke in reminiscence of the Eagles’ feat at the 1994 tournament.

“It’s always a special feeling to be in a big cup final. You’ll feel on top of the world when the referee’s whistle goes and you are champions,” Eguavoen said.

“It’s such a special feeling. You dance, you sing and you remember all the loved ones who have supported you and you feel great that you did not let them down.”

“Players can’t wait for the game to start. They are full of expectations. Sometimes, for some people there’s some kind of tension, some kind of apprehension but the moment the game starts you get on it and if your first touch on the ball is good you just continue from there. For some, they are very confident all day and they can’t wait for the game to start. You are thinking about the game, the people of your country, all the fans, your coach and his support staff etc. Cup final is different. It is special.”

“I must first say congratulations. We have a team that grew during the competition. They picked up as the competition went on, apparently undermining their potential and only realizing that they can win the trophy after beating Ivory Coast. They played well in that match and that was the tonic. You could see that they further lifted their game against Mali. I expect them to lift their game further in the final. That’s the only way to win the Cup. And for them to do that, they must have 100 per cent concentration and play to win because you never know when to get to the final again. I wish them good luck.”

Also speaking, ex-international, Finidi George says he’s happy about the team’s progress under Stephen Keshi, as he believes it lays credence to the quality in local coaches.

“I’m excited about the performance of Stephen Keshi and his team. Sometimes, it is good to enter a tournament as underdogs. It reduces the pressure on you. We have a good team and we should be able to win. I’m particularly hoping that we win so that our authorities can begin to respect indigenous coaches. Our people easily fall for European coaches. And most times they hire the ones who are not better than our coaches,” Finidi said.

“The only difference is the skin and that’s what they respect. I’m not condemning foreign coaches but we appear to generally have complex and we go for any white man in the name of foreign coach. What Keshi is doing now is good. Even if he is no longer there in Nigeria, his success can open the door for other indigenous coaches who should be inspired by the success he has achieved so far and begin to work hard. When you give somebody a national team coaching job, give him about four to five years to perform. If at the end of this period it is clear that he is not performing, you can then disengage him. But it is not so for our people. They sack under one year.

“We’ll not develop that way. I want Keshi to win so that some people can shut up and respect indigenous coaches and encourage them to succeed. We should learn from our mistakes and move on. On the match against Burkina Faso, we will be playing against a team that can run for 90 minutes and they are not tired. They are physically strong, very strong players. I think that what we can do is to pass the ball around. Let the ball run and let Burkina players chase the ball. We must not go into duels with them because of their physical nature. Let the ball do the running. We pass, look for space and attack it. We should try to score and lead well just like we did against Mali. We need to play the way we played our last two matches. If we do, we will win the cup.

“The atmosphere is always electric on cup final days. We didn’t enter the competition as favourites and we marched on to the final where some people now feel we are favourites. We should handle the pressure well and remember that we went in as underdogs. We should not, therefore, be carried away. You play in a cup final to win. No second chance. You must do more than playing. You fight as a team too. The fighting spirit must be there. You must fight on till the referee’s last whistle. I think that we can win the cup and that will make not only our day but also our year.”