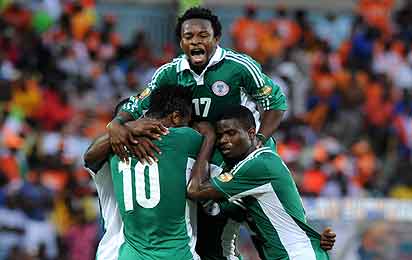 In a thrilling encounter between underdogs and tournament favorites, Nigeria’s Super Eagles have defeated the Elephants of Ivory Coast to proceed to the semis in the 2013 AFCON.

Nigeria’s Super Eagles were supposed to be the underdogs, while Ivory Coast were the tournament’s favorites. However, the Super Eagles downed favourites Ivory Coast 2-1 on Sunday in an absorbing Africa Cup of Nations quarter-final to set up a last-four meeting with Mali.

Sunday Mba grabbed the winner 12 minutes from time after Ivory Coast’s Cheik Tiote had cancelled out Emmanuel Emenike’s first-half opener. Mba’s strike brought the curtain down on Didier Drogba’s Nations Cup career, sending the African legend home without the title he and his teammates craved.

Prior to the game, it will be recalled that Ivory Coast’s Emmanuel Eboue had incurred the wrath of Nigerian social media users with the alleged tweet by the footballer on his Twitter page in which he referred to the super Eagles as “Super Fried Chickens”.