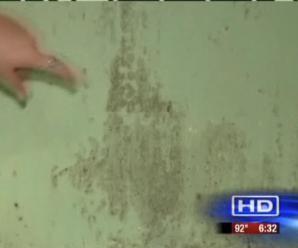 The last place you would think of finding Jesus would be in a bathroom.

A Texas family said they were receiving the power of Jesus by an image of Jesus found in the mold growing in the shower of their home.

Chyanna Richards, who lives in the house, told the news media, she doesn’t care whether it is mold in the bathroom, but said the appearance of the image of Jesus has a meaning.

“Maybe it means something. Maybe look at yourself and see if you need to change something in your life,” she said.

The mold started growing in the bathroom in the house a couple of months ago, when Thomas George, who lives in the house, was in jail.

“Just looking out for us to make sure nothing bad happens or I get in trouble,” said George. “It gives me inspiration just to make it better.”

Neighbor Michael Bearden said he believes that the image is of Jesus, but joked that it reminded him of someone that looked like that as well.

“Jesus. However, it looks a little like me as well!” he said.