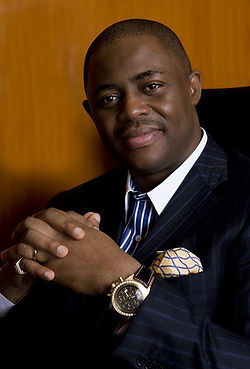 Former Aviation Minister under the Chief Olusegun Obasanjo administration, Chief Femi Fani-Kayode, on Sunday, carpeted the Special Adviser to the President on Media and Publicity, Dr. Reuben Abati, over the latter’s criticism of former aides of Chief Obasanjo – the media war between aides of the former Nigerian leader and  President Goodluck Jonathan’s aides came to a head recently with the allegation by former World Bank Vice President (Africa) Dr. Oby Ezekwesili, that successive administrations since 2007 had squandered over N10trn with no commensurate result.

Fani-Kayode who was reacting to an article written by Abati, titled “The Hypocrisy Of Yesterday’s Men’’ published in the media, did not only disagree with the President’s spokesman but also said Mr. Abati “sought to ridicule and demean” those who served under former President Obasanjo.

According to the former Minister of Aviation, Mr. Abati’s article is a smear campaign and an attempt to intimidate him and his colleagues.

Apparently peeved by Mr. Abati’s comment on the closure of Port-Harcourt Airport under Chief Obasanjo, Chief Fani-Kayode said the insistence on transparency in the administration of the nation’s foreign reserve had clearly rattled the Presidency.

He said: “Abati indulged in a response other than to say that, I ‘shut down Port Harcourt Airport for two years’ and ‘allowed grass to grow all over it.

“This is false. It is a classic case of disinformation coming from a man that is obviously suffering from a very low self-esteem. It is clear that Abati, who is a journalist, has forgotten the most important tenet of his profession which is that ‘facts are sacred and opinion is cheap.”

In his explanation, the closure of the Port-Harcourt Airport was due to the Sososliso plain crash which affected the runway and  was not deliberately closed by the government of Obasanjo.

“Port Harcourt International Airport was closed on December 10, 2005, after the Sossolisso Air crash in which 100 people were killed. The crash affected the runway of the airport very badly and consequently, the then Minister of Aviation, Professor Babalola Borishade closed it,” he explained.