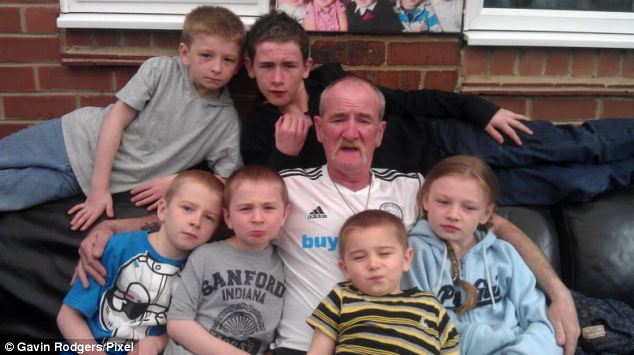 A father accused of killing his six children in a house fire started the blaze as part of a ‘plan’ to frame his ex-girlfriend after becoming locked in a custody battle with her, a court has heard.

Mick Philpott, along with his wife Mairead, allegedly started the fire at their semi-detached home after making reports to the police that his former partner, Lisa Willis, had been threatening him and his family.

There were emotional scenes during their manslaughter trial at Nottingham Crown Court today as the 999 call made by the couple as the fire took hold was played to the jury.

Philpott stood and tried to leave the dock saying ‘I can’t listen to it’ before being made to sit down by security officers.

He spent the remaining minutes sobbing, with his head bowed and hands over his ears as the call played out.

The court was told the family shared an unconventional lifestyle – Philpott, 56, his 31-year-old wife and Ms Willis, 28, all lived in the same house.

A total of 11 children also lived there – six were those of Mick and Mairead Philpott, while four were his children with Ms Willis. Another child was Ms Willis’s with another man.

Mick and Mairead Philpott’s children – Jade, 10, and her brothers John, nine, Jack, eight, Jesse, six, Jayden, five, and Duwayne, 13 – all perished after the fire at their home in Victory Road, Allenton, Derby, in the early hours of May 11 last year.

The couple, along with a third defendant, 46-year-old Paul Mosley, have all denied six separate counts of manslaughter in relation to the deaths.

At the start of their trial at Nottingham Crown Court today, prosecutor Richard Latham QC told the jury the fire was started in the early hours of the morning on the day Ms Willis and Philpott were due in court to discuss the residency of the children.

She had left Philpott and the Victory Road property in February last year, taking her children with her, and had become embroiled in a bitter battle with Philpott.

He planned to frame her and eventually win his children back, and had made numerous reports to the police that she had threatened him, his wife and the children, the jury heard.

Mr Latham told the jury of six men and six women: ‘By May 1 Mick Philpott was reporting to the police that Lisa Willis had made telephone threats to kill him.’The police visited him, he was at times highly emotional and made it clear that he wanted Lisa arrested.

‘If she had been this would have assisted him in the court proceedings, wouldn’t it?’

About a fortnight before the fire Philpott told friends he had an idea for a way of getting Lisa and the children back, Mr Latham said.

‘He told people he had a plan up his sleeve and that she wasn’t going to get away with it – watch this space.’

Mr Latham told the jury of six men and six women that the Philpotts, Ms Willis, and the 11 children had all lived in the house together until February 11 last year.

He said the fire, three months later, was no accident and had been started using petrol in the hallway of the house.

‘We say that this was a plan that went horribly wrong and resulted in total tragedy,’ Mr Latham said.

Mr Latham told jurors they were trying and would ultimately decide the verdict of the case on evidence that the actions of the defendants to any ‘sober and reasonable person’ were unlawful because starting the fire with the children in the house would put them at substantial risk.

‘This is not a murder trial,’ he said.

‘What is alleged is that these children died as a result of the unlawful acts of these defendants who, we say, were acting together in a joint enterprise, setting a house fire.

‘They are criminally responsible for the deaths as a result of setting the fire for some motive, for some other perceived advantage.’

Mr Latham told the jury it was a ‘whodunnit trial.’

He said the jurors had to decide if the fire was an inside job or was started by someone else.

Plans of Victory Road and the house where the Philpotts lived were shown to the jury.

They heard that the three-bedroom semi-detached home, owned by Derby Homes, had a games room with a full-length snooker table and a conservatory.

A caravan and a minibus were parked in the driveway, blocking access down the side of the house at the time of the fire.

Mr Latham said that while Ms Willis and her children were living at the three-bed house, most of the children normally slept upstairs while Mrs Philpott slept in either the living room or the conservatory.

Mick Philpott slept in a caravan outside with Ms Willis.

The adults had a sexual relationship but Philpott had often said he was unhappy with his wife, jurors heard.

‘He often expressed the view he preferred his relationship with Lisa Willis to that he had with his wife Mairead,’ Mr Latham said.

‘He had spoken of divorcing Mairead – not separating from her but divorcing her – in order that he could make Lisa Willis his wife.

‘He wanted to change their status but he wanted them both to still live in the house.’

Ms Willis had become unhappy with the relationship, Mr Latham said, but had not expressed her feelings to Philpott because she was worried about his reaction.

‘Unbeknown to Michael Philpott, Lisa Willis got to the point where she found the whole domestic set-up unacceptable.

‘She knew that to simply announce to Michael Philpott that she found the relationship set-up unacceptable would provoke a singularly unpleasant reaction.

‘He was the one who made the decisions, the women did not.’

On Saturday February 11, Ms Willis told him she was taking her children swimming and did not return home, the jury heard.

‘We say that this event was the catalyst for everything that was to follow,’ Mr Latham said.

Court proceedings began in due course and on the morning of the fire, which happened in the early hours, Ms Willis and Philpott had been due in court to discuss residency of the children.

The court heard that Ms Willis met Philpott when she was 17 or 18 and he was about 45.

She already had son Jordan and they moved into the Victory Road house a short time after meeting Philpott.

‘Her sexual relationship with Michael Philpott started after she had been living there about three weeks,’ Mr Latham said.

‘Almost from the outset he sought to exert total control over her.’

Her wages from a cleaning job were paid into his bank account, as were her benefits.

When she decided she could no longer remain in the relationship she went to stay with her sister, Amanda, before staying in a women’s refuge.

She returned to the home with a friend on February 14 to collect clothes for her and the children and was challenged by Philpott.

‘There was an incident on the doorstep, Philpott manifesting huge aggression and the police were called,’ Mr Latham said.

‘What she had done challenged the very core of his attitude to his family and his women.

‘She had stood up to him, he was no longer in control and that was absolutely unacceptable to him.’

Philpott told friends Ms Willis was not going to get full custody of the children.

On May 1, he reported to the police that Ms Willis made threats to kill him, the court heard.

About a fortnight before the fire he told friends he had ‘a plan up his sleeve’, Mr Latham said.

‘He told people he had a plan up his sleeve and that she wasn’t going to get away with it – watch this space,’ Mr Latham told the court.

‘Michael Philpott said, “There is no way she is having those kids. Just you wait and see”,’ he added.

Mr Latham said Philpott began to set Ms Willis up when she did ‘as she wanted rather than what he required’.

The court heard that in the weeks before the fire Philpott received a call from his wife while taking friends to a darts game in his minibus.

Philpott told his friends, ‘Sorry guys someone is threatening to torch the house with the kids in it’, Mr Latham told the court.

‘This was all nonsense. This was all a way of setting what had become a plan,’ Mr Latham added.
He told court Ms Willis denies threatening to torch the house.