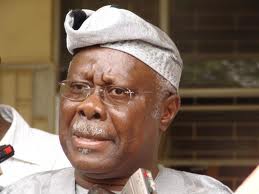 Convicted former National Vice- Chairman of the Peoples Democratic Party (PDP), Chief Bode George, has dismissed the merger deal between the major coalition parties in the country that gave birth to the All Progressive Congress (APC).

It would be recalled that last Thursday, the Action Congress of Nigeria, (ACN), the All Nigerian Peoples’ Party, (ANPP) and the Congress for Progressive Change (CPC), as well as certain chieftains of All Progressives Grand Alliance (APGA), announced the formation of the APC which although they vowed would give good account of itself in the 2015 general polls, alluded will provide a credible alternative to the ruling party, PDP.

Chief Tom Ikimi who addressed newsmen in Abuja said that the merger was informed by the, ‘’resolve to form a political party committed to the principles of internal democracy, focused on serious issues of concern to our people, determined to bring corruption and insecurity to an end, determined to grow our economy and create jobs in their millions through education, housing, agriculture, industrial growth and stop the increasing mood of despair and hopelessness among our people.’’

Reacting to the merger deal, Chief Bode George declared that the APC was a coalition of teenagers in politics on a road to nowhere. He further submitted that the chieftains of the ACN and the CPC whom he noted were in the vanguard of the merger deal were strange bedfellows with no common ground.

“They are teenagers in politics of this country and we aren’t afraid of them. It is even good that for the first time, we are having a semblance of opposition who are living their comfort zones as tribal warlords. Let us see how Bola Tinubu and General Muhammadu Buhari would sustain this. We aren’t afraid. Can Tinubu work with Buhari? It is a huge joke. Where are they going to meet? They are incompatible. They have no common ground.” The PDP chieftain further expressed confidence that the party would remain the party to beat in the country, as he claimed that it was “the only party that has the true colours” of the country.

“The foundation that brought PDP was a coalition of people with different ideologies. It was created to fight the General Sani Abacha regime. But our founding fathers laid a solid foundation. It is PDP with our Constitution that has sustained democracy. We have existed for 14 years.

“Before, politicians only held sway in their tribal zones, but the founding fathers of PDP created a sense of oneness. It is the only party that has the true colours of this country. It is in PDP that you have the major ethnic groups in the country and the minorities coalescing together,” he said.