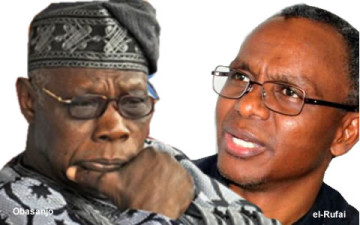 More facts are emerging as to the type of government former President Olusegun Obasanjo operated while in office – one that cared less for moral and ethical concerns.

In continuation of excerpts from the book by a former Minister of the Federal Capital Territory, Nasir el-Rufai titled ‘The Accidental Public Servant’ which is billed for public presentation today at the Shehu Musa Yar’Adua Centre, Abuja, el-Rufai has listed four mistakes which he said the former president made while in office.

These mistakes, according to him, nearly threw spanners in the relationship that Obasanjo had with members of his Economic Management Team.

He said in the book,  “Many of us felt that Obasanjo made four huge mistakes in his Presidency.

“The first was that Obasanjo had borrowed money to acquire certain government assets. The shares were offered to many government officials.”

Among these government officials, el-Rufai listed former Vice-President Atiku Abubakar and the then (and still serving) Minister of Finance, Dr. Ngozi Okonjo-Iweala.

el-Rufai he felt strongly that “as government officials, we were sitting on councils, committees or in the cabinet that would approve some of these transactions.

“In my opinion, even if there was nothing wrong legally with it, there were ethical issues.

“Most of the Economic Team members declined to buy shares and we told Obasanjo that much. Yet, he went ahead, using corporate entities and borrowed from banks and bought some seven hundred million shares.”

According to el-Rufai, Obasanjo’s action irked the former Chairman of the Economic and Financial Crimes Commission, Nuhu Ribadu, so much that he challenged the President on the matter.

Obasanjo’s second error in office, el-Rufai said, was the third term ambition of the ex-President, which he said was considered as a blemish for all members of the government.

He also faulted his former boss on the fundraising for the Obasanjo Presidential Library while in office and the mistake of installing inexperienced stooges as his successors.

The former minister wrote, “The fundraising for the Obasanjo Library was one issue on which Oby (Ezekwesili), Nuhu (Ribadu) and I made separate and joint representations to Obasanjo not to proceed with.

“We felt that it was inappropriate and unethical for a sitting President to raise funds for something of which he would be a direct beneficiary.

“I was strongly of the view that Obasanjo should have arranged with his successor to organise that in his honour after leaving office.”

He said Obasanjo did not think twice before replying him that “no one would donate to the project once he was out of office.”

He said Ribadu also tried, and “threatened Obasanjo to get him to cancel the planned event.”

All their actions, he said, were fruitless as the former president went ahead with the project.