Officials are searching for a French family of 7, including four children that were reportedly kidnapped in northern Cameroon.

“The three adult tourists and four children were picked up early today (Tuesday) by men riding on motorbikes who rode off toward the border into Nigeria,” the Far North Regional Delegate in the Ministry of Forest and Wildlife, Jean-David Ndjigba said from the province’s capital of Maroua.

President of France Francois Hollande on Tuesday confirmed that one of Nigeria’s Islamic extremist sects was involved. “They have been taken by a terrorist group that we know and that is in Nigeria,” Hollande said in a press conference, according to Reuters.

Military helicopters are searching for the tourists, who were on vacation and abducted in Cameroon’s Far North Region, a Cameroonian government official told The Associated Press. 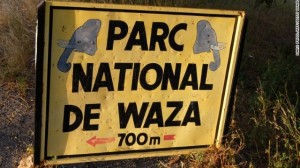 Authorities are canvasing Waza Park, a natural wildlife reserve where Ndjigba said the family’s vehicle was retrieved. The area attracts mainly foreign tourists but its tourism potential is marred by frequent raids and abduction for ransom.

A Cameroonian trader, who pleaded anonymity for fear of his safety, said he stumbled upon the scene where he saw a group of armed men on motorbikes force the Europeans to leave their car that got stuck in the sand at gunpoint. “Nobody could help the white men because the kidnappers were heavily armed and they threatened to shoot anyone that approached,” the trader said.

The French government has started extensive search for its abducted nationals and has promised relatives of the victims their loved ones will be rescued.