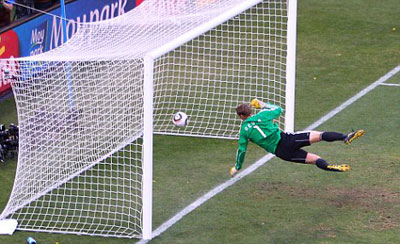 Ever since the dawn of football, governing bodies have been looking for ways to avoid controversial refereeing decisions.

CONTROVERSY: There was controversy during the World Cup game between Germany and England when Frank Lampard’s shot went over the line-but was disallowed.

Probably the most famous cases on the international stage, curiously all involve England, but the three events span 46 years.

The argument still rages to this day on whether Geoff Hurst’s controversial third goal in the 1966 World Cup final at Wembley, awarded by referee Gottfried Dienst and Soviet linesman Tofik Bakhramov, actually crossed the line.

Then, in the 2010 World Cup against Germany, Frank Lampard had a perfectly good goal wiped out as England slipped to a 4-1 defeat, a decision which led FIFA president Sepp Blatter to apologise and push for goal-line technology to be introduced.

And in last year’s Euro 2012, Ukraine were on the receiving end when Marko Devic’s effort, which had clearly crossed the line, was hooked away to safety by John Terry.

Goal-line Technology (GLT) will be in place for this year’s Confederations Cup in Brazil, as a dress rehearsal for next year’s World Cup when it will be fully operational.

At present, two rival systems have been licensed by FIFA – although when it comes to putting the contracts out to tender, two more German firms are expected to throw their hats into the ring.

The most high profile system is Hawk-Eye.

Hawk-Eye works by utilising six cameras at each goal to track the ball on the pitch, not disimmilar to the system in use at the Wimbledon tennis tournament.

The British system’s software employs “triangulation” to pinpoint the exact location of the football and if it crosses the goal-line, then an encrypted radio signal is sent to the referee’s wristwatch to indicate a goal has been scored.

In line with FIFA’s requirements, the whole process takes less than a second to complete.

The other competing system is GoalRef from Germany.

GoalRef uses a microchip implanted in the ball and low magnetic waves around the goal.

The system detects any change in the magnetic field on or behind the goal-line to determine if a goal has been scored and, again, the process takes under one second for a message to be relayed to the referee.

Barring any last-minute problems, the expectation is that one or both systems will be used for the Confederations Cup and the World Cup.

And in line with England’s history of controversy with goal-line incidents, London bookmakers have immediately quoted England at 66-1 to have a goal awarded by goal line technology at the 2014 World Cup.

The same odds are quoted for a disallowed goal.

Or anyone who fancies a more ambitious flutter should get down to Ladbrokes and put money on England at 400-1 to become the first side to win a major tournament thanks to being awarded a goal in the final under the new rules.