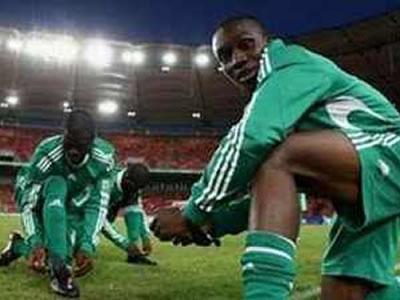 Two players of the Nigerian men’s Under-17 national team, the Golden Eaglets, have been confirmed to have been involved in a ghastly motor accident on Sunday.

Goalkeeper Adamu Abubakar and Friday Njengo were confirmed to have been involved in the car crash while on their way to the team’s camp in Calabar.

The team’s head coach, Manu Garba, has been in touch with the affected players, now receiving treatment at the Federal Medical Centre in Jalingo.

Abubakar is said to have suffered injuries to his head and shoulder while Njengo’s condition is believed to be bad and “will undergo x-ray,” according to coach Garba.

The Golden Eaglets’ coach lamented that it is unfortunate the accident happened at a time the youngsters were bracing up to serve their fatherland.

“I called them at Federal Medical Centre and the doctor said Friday (Njengo) will undergo x-ray to determine the extent of injuries but he is still unconscious,” confirmed Garba.

It has also been confirmed that the accident occurred at Dan Anacha Village in Taraba State as the players travelled from Jalingo via a commercial bus.

The Nigeria Football Federation (NFF) has been informed of the incident and its president, Aminu Maigari, who is in South Africa for the Africa Cup of Nations, is said to have directed that two officials from the federation travel to Jalingo to see the players.

The training camp of the Nigerian Under-17 team at the Princeville Hotel inCalabar commenced as scheduled with almost 28 out of the 30 players invited reporting to camp except for the duo of Abubakar and Njengo.