Nigeria’s singing sensation Susan Oluwabimpe Harvey, popularly known as Goldie who died last Thursday was dead on arrival at Reddington hospital where she was rushed to. Management of the hospital disclosed this yesterday while confirming the sad incident. 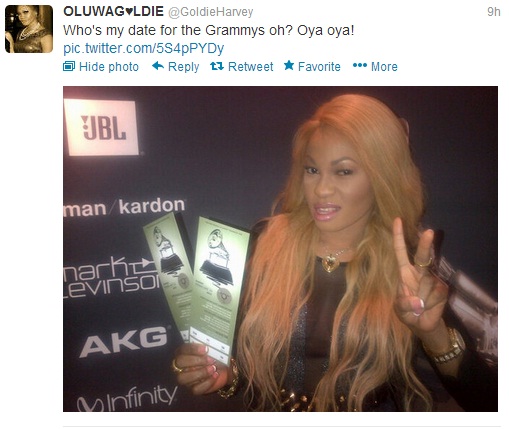 The confirmation comes even as another Nollywood actor, Lugard Onoyemu was said to have slumped and died while playing football on the pitch of the national stadium, Surulere, Lagos yesterday. A statement by the hospital’s Corporate Affairs Manager, Franklyn Ovbigbahon, stated that around 7.30 pm on Thursday February 14, 2013, “a high profile media personality was brought to the Reddington Hospital.

She was clinically dead on arrival at the hospital.” The statement further said that despite that fact, some emergency response staff on duty made every effort to resuscitate her adding that the case was now being handled by the Coroners Office to determine the cause of her death. The hospital however offered its condolences to the family of the deceased on the unfortunate incident.

Goldie who represented Nigeria in last year’s edition of the reality show Big Brother Africa was said to have taken ill soon after returning from the United States where she had gone to attend the 2013 Grammy Awards that held last weekend. Goldie reportedly died after an asthma crisis. Just as Nigerians, especially music lovers are trying to come to terms with the sudden death of Goldie, a Nollywood actor, Lugard Onoyemu has been reported dead.

Onoyemu who was the pioneer secretary of Actors Guild of Nigeria (AGN) Lagos chapter slumped and died during a football training yesterday evening at the National Stadium, Surulere, Lagos. Confirming his death, the state chairman of the Guild, Emeka Rising Ibe said that the deceased who had been battling a heart related ailment, was immediately rushed to the hospital but couldn’t make it.

Ibe added that Onoyemu’s body has been deposited at the Lagos State University Teaching Hospital (LUTH). With tear soaked eyes, an actress, Angela Phillips said “ I couldn’t cry when I heard the death of Goldie but up till now, I have not stopped crying since I heard of the death of Lugard. It is too painful.

This was a man that sacrificed everything for AGN and got nothing. AGN is like a baby to him and he just suffered for this industry and look at the way he died? People have been dying but this one is different.

The well to do in the industry know that he has been ill yet, did nothing to help him, now that he is gone, they will start making donations. It is sad.” It was gathered that the late thespian from Delta State had featured in numerous flicks.