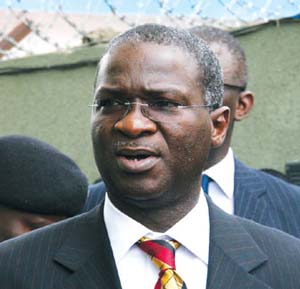 Governor Babatunde Raji Fashola of Lagos State has joined critics of the good governance tour embarked upon by the Federal Government, saying that Nigerians and indeed Lagosians do not need such exercise to know whether or not they are well governed.

Speaking on the occasion of his 2,100 days in office, Fashola said that the Federal Government could not point to a 100-kilometre road that successfully connected two states in the country. Describing the tour led by Minister of Information, Mr Laban Maku, as ill-conceived, Fashola added that it was an attempt to appear busy. According to him, completed projects such as the Ibeshe road in Ikorodu , the Mother and Child Care Centre in Amuwo Odofin and Alimosho, the completed School of Nursing, among other road networks in the state were examples of good governance.

Speaking on the recently commissioned Eko Atlantic City Project, Fashola castigated the Lagos State chapter of the Peoples Democratic Party (PDP) for politising the visit to the country and involvement of former president of United States (US), Mr Bill Clinton, in the project.

According to him, the principal actors in the party were averse to development of the country, adding that “I thought I have seen the worst our opponents have produced, they seem never to be ashamed to roll in the mud. They have shown amateurism again and like they are behind global trends.”