Google has launched a touchscreen laptop in a bid to take on Apple in the luxury laptop market. 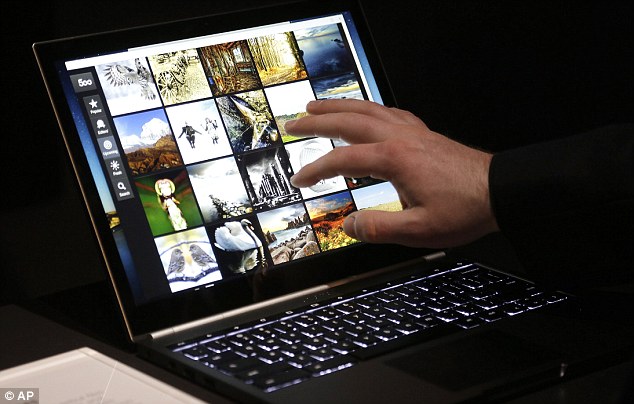 The $1049 Chromebook Pixel has a high resolution display that makes individual pixels invisible to the naked eye.

Although Apple has a similar display, Google says the addition of touch, and 1TB of free storage on an online hard drive, make its machine more attractive to ‘power’ users.

“We wanted to rethink everything possible in a laptop,” said Sundar Pichai of Google, who revealed the machine at a special event run in Silicon Valley and London.

“The screen is the highest resolution screen ever shipped on a laptop, and we don’t want users to deal with pixels – so users will never see them.

“People want to reach out and touch – so we built in full touch.”

The laptop, the first Google has designed and built itself, will be made in Taiwan.

It will compete directly with Apple.

“Apple has been at this a long time, and has built something amazing,” Pichai said of Apple’s products.

“But if you live in the cloud this is the best experience you can have.”

The machine uses Google’s Chrome OS, which is based on the firm’s web browser.

Although it does have a hard drive like a traditional laptop, Google also gives buyers a 1TB drive on its ‘cloud’ service, which is free for three years – although the firm said it did not know how much users would have to pay to keep this after three years.

“We believe that’s about the lifespan of the Pixel,” said Mr Pichai.

He said the firm expected other manufacturers to release touchscreen laptops soon.

“Pixel is a fully finished project – but we hope it will show that Chrome is ready for touch,” he said.

Google has already developed special touch versions of its apps, and said it expected other developers to do so quickly.

The gadget will compete with Microoft’s recent Surface tablet, which has a clip-on keyboard to turn it into a ‘real’ laptop.

A Pro version capable of running the firm’s latest Windows 8 software, and costing $999 in the US, was recently released, but the firm has refused to reveal sales details or say when it could become available in other countries.

Some designs have screen that flip over, while others rotate, allowing the gadget to be used as both a traditional laptop and a tablet.

The firm also hit back at complaints that users could become confused between the laptop and tablet running its Android software.

“Now the lines are blurring, we have two viewpoints here and we are doing both – we are giving a choice to the world,” he said.