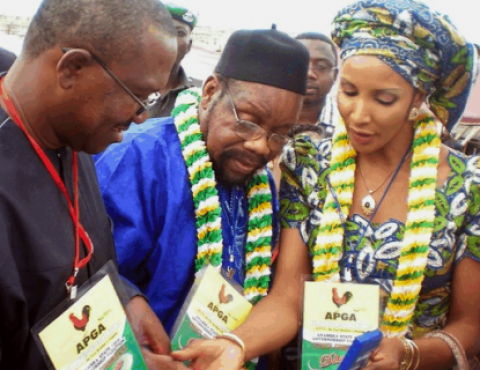 In separate reactions, Governor of Anambra state, Peter Obi, widow of late Igbo leader, Dim Chukwuemeka Odumegwu Ojukwu and Nigeria’s Ambassador to Spain, Bianca Ojukwu, on Wednesday, spared no words as they condemned the demolition of Ojukwu Memorial Library in Owerri by yet to be identified persons.

Speaking during an on the spot assessment of the demolished property, they described the action of the perpetrators of the evil act as a sheer act of wickedness, adding that the public would have benefited immensely from the use of the library facilities when completed.

According to Obi, “the effort it took to build this library should be appreciated and not repaid in this manner”.

On her own part, Bianca said: “I am astonished that an Igbo man can be capable of such wickedness; to destroy something built in memory of a man the entire Igbo nation is so proud of”.

The sponsor of the project and leader of the Movement for the Actualization of Sovereign State of Biafra (MASSOB), Mr. Ralph Uwazurike, said despite the setback, the project would continue.

The building located on No. 2 Ralph Uwazurike Street, Area G, New Owerri, was being built in honour of the late Chukwuemeka Odimegwu Ojukwu who died